As a mathematician trained in supercomputing, I always had this dream of delivering scientific lectures to the public in an exciting way that captured minds and kept them interested to the end.

Actually, I had that type of teacher when I was an undergrad student who delivered difficult mathematical concepts in a joyful way, to the extent that I and my classmates felt sorry when her lectures came to an end. She was certainly a skilled teacher which meant that I could even do my homework immediately after the class without going back to my notes.

After receiving a PhD degree in Mathematics, I joined the King Abdullah University of Science and Technology (KAUST). It is a graduate university that was established about 10 years ago on the shores of the Red Sea in my beloved country, Saudi Arabia. A central aim of this institute is to perform research on sustainable technologies and it is well equipped for research, education, and innovation. King Abdullah (May God have mercy on him) ordered it to be established in order to revive the “House of Wisdom” that existed in ancient “Golden Age” of Islam so that it would become a beacon for knowledge for the upcoming generations.

As a computational scientist at KAUST I have discovered that supercomputing is a field that is a bit vague in the minds of the public and even for others who master different scientific fields, even though it is an effective tool for advancing the work they do. For this reason, I have engaged in training and in arranging live broadcast seminars to support HPC education. I have also written a user manual for a supercomputer to be included in a flyer that I designed.

At KAUST, I was introduced to an incredible Winter Enrichment Program (WEP) that is held annually at KAUST for new students.  It’s also open to Saudi nationals and to the whole university community. It gathers top minds and talents globally to present diverse topics that are interesting and aligned with the university mission. Since my personal mission is to reach out to the community to engage them with regard to supercomputing, I realized that the WEP could be a perfect venue for fulfilling my dream of creating scientific lectures that are inspiring and interesting. Submissions were competitive but I’m glad to say that I have had most of my proposals accepted which have gained popularity as I learnt from the coordinators registering people and from the feedback I received. I wish to continue this activity and collaborate with global scholars with regard to creating such lectures as a means of serving the supercomputing community. 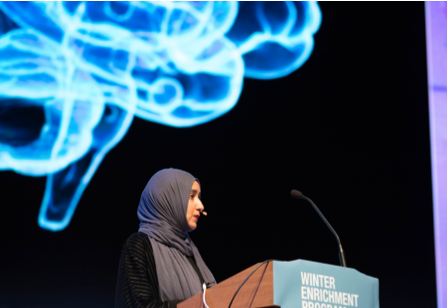 This is a brief history that enables attendees to absorb the role of supercomputers in enhancing the Science of Math.

This lecture sheds light on the most notable wonders of the great Egyptian Pyramids over time. The topic is approached historically, scientifically and philosophically, and is followed by a consideration of the latest theories in this field. The major emphasis is on the mysterious numerical connections found in these works with the digital Pi and how nowadays supercomputers are racing to break the latest records in terms of calculating digits of this transcendental number.

This brief history elucidates the role of supercomputers in enhancing progress in mathematics. Moving through the exciting history of supercomputing, we touch upon the top supercomputers of its time and their important applications. This is followed by a stimulating story about a supercomputer simulation that has proven the validity of a theory that was proposed 40 years ago: simulating the evolution of the universe.

The mathematician Dr. Christian Klingenberg describes in his talk a self-consistent computer simulation of the evolution of the universe beginning soon after the Big Bang and ending with the formation of realistic stellar systems like the Milky Way. This is a multi-scale problem of vast proportions. The first step has been the Millennium Simulation, one of the largest and most successful numerical simulations of the Universe ever carried out. It is shown how this is carried to a much higher level of physical fidelity on the latest supercomputing platforms.

Sunway TaihuLight, until recently,  was the fastest supercomputer in the world today. It can perform calculations at a rate of 93 petaFLOP/s where each 1 petaFLOP/s is 1 quadrillion floating-point operations per second. However, in comparison with the human brain this enormous rate of calculation is dwarfed by the processing speed of a human brain. On the other hand, the human brain remains slow in implementing floating point arithmetic. Nevertheless, considering the amount of power required by the fastest supercomputer to operate – it is found to be enough for a village the size of KAUST- the brain, nonetheless, requires only the power to make a light bulb glow!