The Lorenz system is a widely studied example of a chaotic system. It’s classically simple, needing only three coupled equations to exhibit a variety of types of traditionally chaotic behavior. First described by Lorenz in 1963, the system was initially designed as a simplified model of convection in the atmosphere.

We are going to build a model in Unity that visualizes trajectories in this system. This will present a few challenges. As a chaotic system, our solution needs to be as precise as possible. That means working in double precision even though Unity defaults to single for many of its built in variables. It also means moving our calculation out of the Update loop, as we want more control over the timestep in our solution and we don’t want to tie it to the frame rate. Finally, it means implementing a higher order solution than the leapfrog solutions we used in the last two posts. In future posts, I’ll give you some specialized classes that can help in modeling this specific type of problem (systems of ordinary differential equations), as well as talk about some methods for improving the efficiency of implementing ODE models (threading to separate the calculation loop from the user interface loop, use of external DLLs to compile code for C performance, called within your C# scripts). 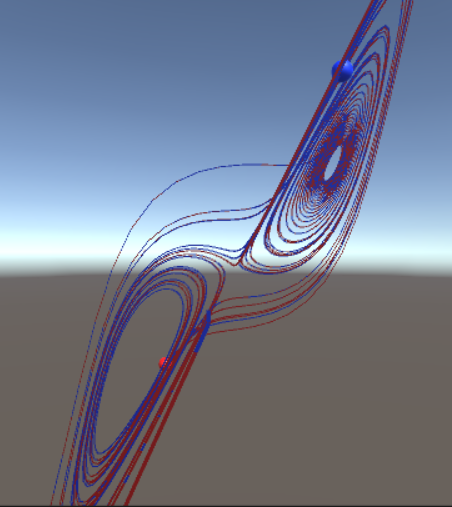 For now, we are going to implement our solution as a script attached to a game object that will trace out a trajectory. The solution will be stored and calculated in double precision, using a 4th order Runge-Kutta method which we will code into our script. Finally, we will add a trail renderer effect to the object to see a trace of the trajectory in the Unity scene.

The full details of the activity can be found at https://joinerda.github.io/Lorenz-Butterfly.